We hope you can join us at one of our upcoming events — either in person or online. 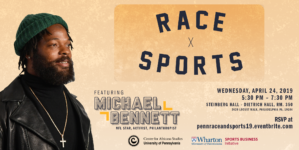 When Michael entered the NFL, rigorous performance training taught him the importance of eating nutritiously and how vital it is to not only maintain fitness, but overall well-being. With Michael and his wife Pele being raised in Texas, they grew up in a lower income area and witnessed family and friends struggle with obesity and staying healthy.

Michael and Pele Bennett decided there was an immediate need to establish The Bennett Foundation and focus their efforts on under-served and minority communities through health and nutrition.

This past off-season, Michael wrote a New York Times best-selling book titled, “Things That Make White People Uncomfortable,” and also visited Senegal where he sponsors 100 African girls through his partnership with #iamtheCODE. This trip was particularly significant for Michael, as he learned through African Ancestry.com earlier in the year that he is Senegalese, making the trip a spiritual and eye opening experience for him.