Last Friday, the Kansas City Chiefs acquired offensive tackle Orlando Brown Jr. from the Baltimore Ravens in a trade involving six draft picks. How did the teams value such a complicated deal? By using the “The Chart,” of course.

“The Chart” was first drawn by the Dallas Cowboys over 30 years ago. It was simply a one-line distillation of the draft-pick values implied by about 40 trades between 1987 and 1990. As coaches and scouts moved from the Cowboys to other teams, The Chart caught on and became the common currency for draft-pick trades. As Mike McCoy, the actual creator of The Chart, said in 2006, “For a rinky-dink concept, it has worked out pretty well.”

Indeed. But should a “rinky-dink concept” based on a few dozen trades in the late 1980s still be guiding trades in 2021? And what does it mean if it is? 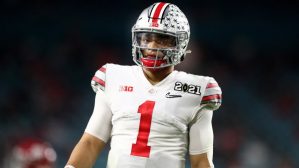