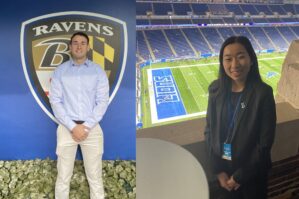 Nearly every young sports fan dreams of one day growing up to work for their favorite team.

Similarly, nearly every one of them also gives up on this goal, chalking it up as an unrealistic pursuit. They decide they’re content getting their front office fix by playing in a fantasy league, participating in social media water cooler talk, or annually queueing up Kevin Costner’s Draft Day film.

Drapkin spent training camp with the Baltimore Ravens as a football analytics intern. For four weeks, he worked with the Ravens’ player personnel staff, learning how to approach the game with the critical lens required of front office staffers.

“A lot of the experience I got was figuring out how they watch practices,” Drapkin said on a recent episode of The Daily Pennsylvanian’s Quaker Nation podcast. “Hanging out with scouts, understanding how they think about things, watching film with them, dissecting film [and] players. Every day, we would go out to watch practice in the morning, talk to the scouts, ask them what they were looking for in different players.”

While analytics are becoming a bigger part of the game for all NFL organizations, it is not yet a given that teams prioritize them. The Ravens, however, are known to be one of the most analytically minded teams in the NFL. Working with them gave Drapkin an inside look at what the future of gameplay might look like and how teams like the Ravens are well-positioned as the league undergoes a shift.

“Much has changed, and the Ravens just have a lot built out because they’ve been doing it for a while now,” Drapkin said. “I think that the [Ravens and Cleveland Browns] are very exciting to watch as a result of that, because in football, the teams that are sharp analytically tend to play with styles and be aggressive in ways. Higher scoring makes things more exciting.”

Like Drapkin, Hu spent her internship as an analytics intern. However, Hu interned with a team much newer to the analytics trend.

“The Lions, I would say, are a bit newer in terms of analytics,” Hu said. “The department has only been around for a few years … so we’re kind of a small group right now.”

Before Hu arrived in Motor City for her internship, the Lions had undergone drastic organizational shifts. Out went general manager Bob Quinn and head coach Matt Patricia, who were let go after several years of lackluster on-field results. In their places arrived current general manager Brad Holmes and first-year head coach Dan Campbell. Together, the two of them are trying to both rebuild the Lions roster and construct an analytics department from the ground up.

“Dan Campbell and Brad Holmes are both very much embracing analytics,” Hu said. “I think that’s great because they’re more willing to listen to what we’re saying.”

At first glance, it might seem like nothing has changed for Detroit this season. The team is 0-10-1 and sits at the basement of the NFC North standings. But on the field, and in the front office, the tone is different with this team. The organization is focused on winning, and everybody involved with the team plays a role in making that happen.

That feeling of being a part of the team and feeling invested in the team’s on-field result each week was one of the best parts of working with a team for the two Wharton students.

“Being in an organization where everyone loves football and it’s oriented towards winning games, winning championships …There’s just like a sense of like family and camaraderie that I think is really unmatched,” Drapkin said. “It just felt like a special place to be because everyone was interested in the same things and really aligned toward the same goal.”

“One of the coolest things I was able to do there was just be around people who genuinely loved football,” Hu said. “I could just go across the hall and talk to one scout. We could just start a discussion about one random coverage, and we could talk for a few hours and it would feel like no time had passed.”

The two also relished the “Welcome to the NFL” moments that made them stop and pinch themselves to make sure this wasn’t all just a dream.

For Drapkin, it was arriving for his first COVID-19 test at the Ravens facility and finding that he was standing right behind 2019 NFL MVP and former Heisman winner Lamar Jackson. For Hu, the moment came while she was facilitating autograph signings for Lions quarterback Jared Goff.

While their internship ended months ago, Drapkin and Hu are still a part of their respective teams’ communities. They have continued supporting the players, coaches, and front office staffers that they spent the summer working so closely with. At the end of September, they even traveled to Detroit to see their two teams face off. What seemed like a lopsided matchup at first turned into an instant classic. The Lions nearly completed the upset, losing on a record-setting, 66-yard field goal by future Hall of Fame kicker Justin Tucker.

“Given that it was both the teams we had been working for over the summer, we thought it would be a good trip to plan,” Drapkin said. “The Lions fans were still sort of cheering and then it took a few seconds for it to hit everyone that [the field goal] went in … that was a historic moment.”

For Drapkin and Hu, the game was the perfect way to end their once-in-a-lifetime summer experiences. It captured the highs and lows that come with not just being a sports fan, but with being someone whose work translates into what happens on the field every Sunday. Those are the feelings that drew the two to want to work in sports, and they are the same ones that will propel them forward as they continue their careers in sports analytics.